There are millions of individuals in the United States who suffer from substance use disorder. A study done by the National Center for Drug Abuse Statistics on general drug use showed that 31.9 million (11.7%) of the population over the age of 12 currently use illegal drugs, and that 20.3 million people admitted to having a substance use disorder in 2018. Amid the ongoing crisis of addiction in the United States, a popular topic of discussion is “what’s the most addictive drug?”

Knowing what the most addictive drugs are and what causes them to be so alluring is a useful tool in the battle against addiction. Several factors are involved in determining what the most addictive drugs are, including the effects on the brain, effects on the body, and how readily available it is to users. While all drugs have the potential for abuse, some are naturally more addictive than others.

Heroin is a powerful opiate that blocks opiate pain receptors throughout the body and is the leading culprit of drug overdose deaths in the United States, especially when laced with dangerous additives like fentanyl. This opioid can be found as a white or brown powder, and it also comes as a black, sticky substance.

Heroin can be snorted, smoked, or injected directly into the veins. One of the reasons that opiates are some of the most addictive drugs out there is that they quickly result in physical dependency, even if taken as prescribed. Along with its ability to block pain receptors, heroin also stimulates the brain to release feel-good hormones that stimulate the brain’s reward center and lead to drug cravings.

Heroin users soon develop a tolerance and require higher doses of the drugs to get the euphoric and pain-blocking effects they are seeking. All of these factors inevitably lead users to develop a heroin addiction.

Cocaine is a powerful stimulant and one of the most commonly used drugs. It provides increased energy and euphoric feelings and stimulates the brain’s reward system by releasing high levels of dopamine, which then encourages regular use. Over time, cocaine users start taking higher amounts of the drug.

Increasing the dosage of cocaine also increases the risk of overdose and leads to psychosis, stroke, cardiac arrest, and heart failure in serious cases. This makes cocaine highly dangerous in addition to being one of the most addictive drugs.

An even more addictive form of cocaine is crack cocaine, a crystallized version of the powder. This drug is made by mixing and heating powder cocaine with a base like baking soda and water. This process yields the purest form of cocaine possible.

Because of this, crack produces a more intense and fast-acting high than powder cocaine. For this reason, users will often take the drug over and over again to maintain their high. Behaviors like this rapidly increases tolerance, so users take more and more of the drug to achieve the same feelings. This makes crack cocaine an even more addictive form of one of the most addictive drugs.

Methamphetamine, also known as crystal meth, is an addictive stimulant drug belonging to the class of drugs known as amphetamines. Crystal meth users will smoke, snort, or inject the drug. Crystal meth provides a short, intense high that leads to euphoria, a rush of energy, and a boost in confidence.

Many argue that crystal meth is the most addictive drug in the world since crystal meth is three times as powerful as cocaine. The effects of meth occur rapidly, but also fade quickly leading people to repeatedly binge on this drug and stay awake for hours or days on end. 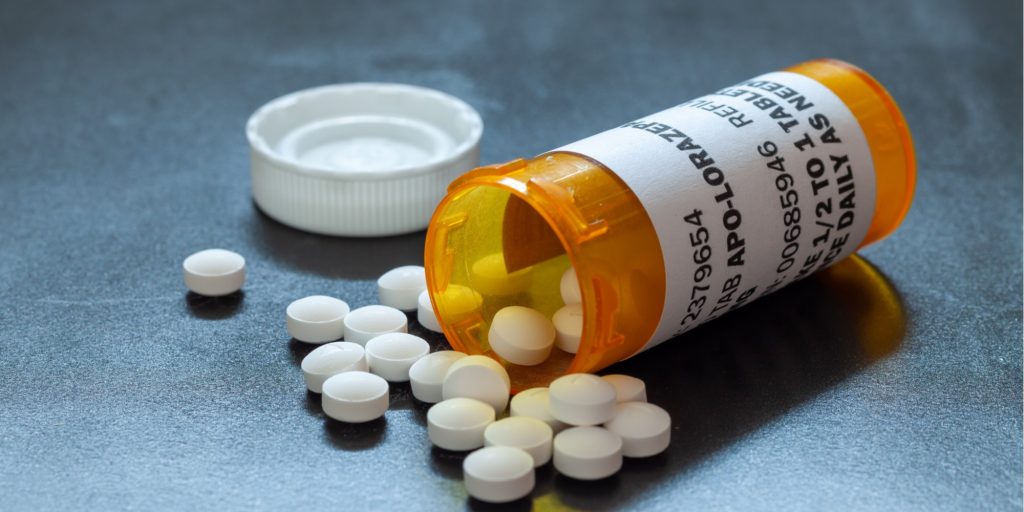 If you suffer from a mental health condition like anxiety, a doctor may prescribe a benzodiazepine, or benzo, like Xanax, Valium, Klonopin, or Ativan. This type of drug helps ease feelings of worry, tension, and nervousness. Benzodiazepines can also produce a euphoric high and a feeling of relaxation.

A study from the National Library of medicine on benzodiazepine dependence shows that up to 44% of chronic users become dependent. Within one to four days of discontinued use of benzodiazepines, users may start experiencing symptoms of benzodiazepine withdrawal, such as insomnia, anxiety, panic attacks, and muscular pain and stiffness.

Because of this, many users are afraid to stop using benzos because they don’t wish to experience the withdrawal symptoms, making it one of the most addictive drugs. Benzo withdrawal can be fatal in certain circumstances, meaning medically supervised detox is necessary.

Alcohol is legal, which is one of the reasons abuse rates are so high in the United States. It is cheap and can be bought at many places including grocery stores and gas stations. It is also considered socially acceptable to drink alcohol, and many social events encourage alcohol consumption.

When you are physically addicted to alcohol, giving up drinking results in serious withdrawal symptoms. The most addictive drugs include both legal and illegal substances. If you find yourself abusing any of these drugs, it’s important to get the appropriate help.

Getting Treatment for Drug Addiction

If you or someone you know has fallen victim to any of the dangerous substances on this list of the most addictive drugs, know that there are successful treatments available to you. If you get support as early as possible, you can prevent your addiction from spiraling out of control.

The Woods at Parkside is an addiction treatment facility that is dedicated to the physical, emotional, and mental recovery process for all of our patients. In addition to a safe detox program that paces out the process over the course of three to 10 days, we offer long-term solutions on maintaining a healthy lifestyle without relying on drug use.

Treatment will allow you to gain control over your addiction, stay sober, and lead a happy life, free from substance abuse. Reach out to us today by calling 419-452-4818, or by filling out our online confidential contact form. No matter where you are in your current journey toward recovery, The Woods at Parkside is a place where you can find happiness and improved health.