Teen drug abuse can be incredibly dangerous, and it often goes undetected by parents. Here’s an overview on how to tell if your teen might be abusing drugs and the most common addictive drugs teens use.

Are you concerned that your teenager may be abusing drugs? Talk to our team at The Woods at Parkside for answers and help. 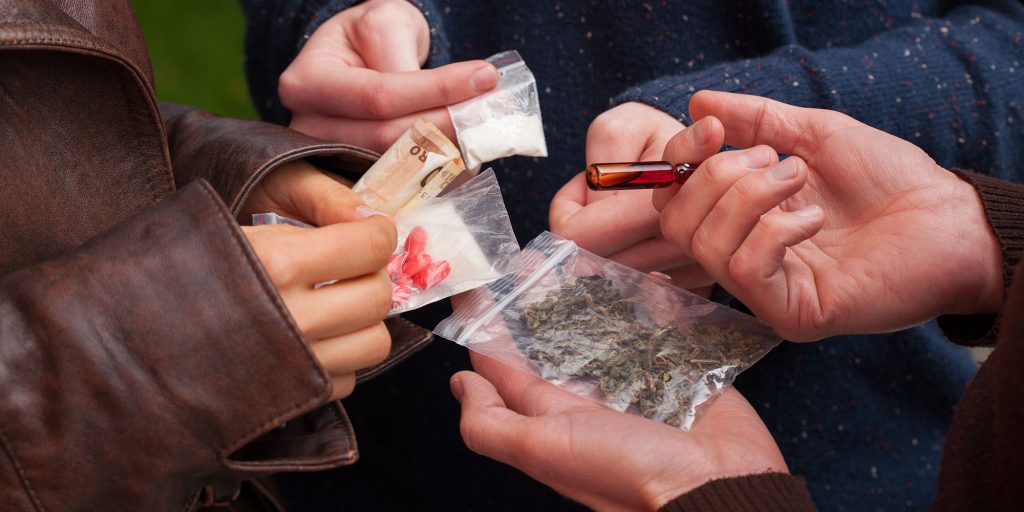 Understanding the reasons for teen drug abuse may be the first step in noticing whether your child is using them. Once you know why teens abuse drugs, you can recognize when your teen is at risk. Then, you can stay more alert to the signs of drug abuse in teens. Here are some of the reasons teens begin using substances.

Signs of Drug Abuse in Teens

If you notice these signs, getting help for your teen may be life-changing. With the right treatments and support, they can avoid a life of drug addiction and all the problems that can follow it.

10 Most Abused Drugs by Teens 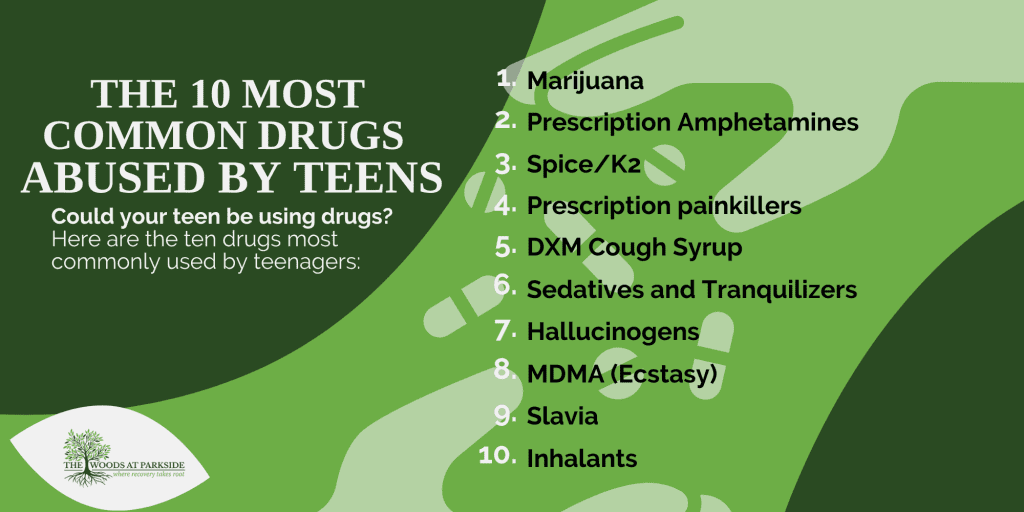 The following list includes the National Institutes of Health’s top ten most abused drugs by teens, in order of most common to least common overall. However, inhalants and cough syrups would rank higher if the list covered only younger teens. Another thing to note is that the NIH lists sedatives and tranquilizers separately, though they are usually grouped together.

Since its legalization for medical uses, marijuana seems to be more common and often used openly. Many people – both teens and adults – believe that marijuana is not harmful. However, it can have some harmful effects, including cannabis use disorder. Yet, it is by far at the top of the list of most abused drugs by teens.

Prescription amphetamines are stimulant drugs that are given to children and adults for conditions like ADHD, obesity, and narcolepsy. Some examples are Adderall, Dexedrine, and Ritalin. These drugs have a profound effect on the body, raising blood pressure, killing appetite, and disrupting sleep. They also cause euphoria and anxiety and boost confidence.

Spice and K2 are both names for what is called “synthetic marijuana.” Producers make these drugs by spraying cannabinoid chemicals onto herbs. Although these drugs were once completely legal, many of the chemicals used have now been made illegal. What’s more, the effects of spice or K2 can be even more intense than those of natural marijuana. Because these drugs are made with varying types of chemicals, the effects can be completely unpredictable.

Teen drug abuse of prescription painkillers is a significant problem, especially when a parent has chronic pain and has these pills on hand. This type of most abused drugs by teens includes Tramadol, Vicodin, and Oxycodone.

Teen drug abuse often centers around over-the-counter and prescription drugs. That is the case with DXM cough syrups. These drugs give the teen a high with the same risk as buying street drugs. If a parent keeps these syrups on hand, using them requires little effort.

Sedatives are CNS depressants and include barbiturates, benzodiazepines, and sleeping medications. From phenobarbital and Seconal to Xanax, Klonopin, and even alcohol, teens often use sedatives to calm down or numb emotional pain.

Hallucinogens, also called psychedelics, include LSD, PCP, DMT, ecstasy, salvia, ketamine, marijuana, and ‘magic mushrooms’ (psilocybin). This entry on the list includes all of these substances and other hallucinogens. These drugs change your teen’s perception and behaviors and may produce toxic effects.

MDMA, or ecstasy, is a hallucinogenic substance that many teens use at parties, concerts, and nightclubs. Although its initial effect might be happiness and a feeling of social connectedness, the long-term effects can lead to addiction.

Salvia is an herb that can cause hallucinations, which can be extremely frightening. This plant is not illegal. However, the experience can be incredibly intense.

Inhalants are compounds that contain fumes, such as nail polish remover, glue, and gasoline. These substances are cheap and handy for teens who want a quick, easy high. However, inhalants can cause physical dangers ranging from suffocation to seizures to coma.

In addition to these ten most abused drugs by teens, teens might also use drugs like cocaine, crystal meth, and heroin. While these drugs can fit into some of the categories above, they are street drugs, which bring additional dangers. This includes the hidden dangers of buying illegal drugs online.

How Many Teens Abuse Drugs?

If you think drug use is rare among teens, chances are you don’t know how many teens abuse drugs. According to DrugAbuseStatistics.org, teen drug abuse is a significant problem. About 2.08 million teens used drugs in the last month. By their senior year, 46.6% of teens have used illicit drugs. Even worse, 4,777 Americans between 15 and 24 years old overdosed and died from drug use in a year. In fact, 11.2% of deaths due to overdose happen to young people between 15 and 24.

Where to Get Help for Teen Drug Abuse

If you are concerned about teen drug abuse in your family, you can find help at The Woods at Parkside near Columbus, Ohio. You can refer your teen for treatment at our beautiful facility. Here, they will have medically supervised detox if needed, along with residential programming and outpatient care.

With programs, groups, and therapy geared to the needs of this age group, your teen can recover from their addictions. Then, they can regain their ability and desire to enjoy and succeed in life.

Do you detect signs of drug abuse in your teen? Come to the experts at The Woods at Parkside for guidance and support.