It’s all too easy to get caught up in the glitz and glamour of alcohol. But alcohol is a drug and alcohol addiction is a serious health problem. Alcohol addiction, more properly known as alcohol use disorder (AUD), affects as much as 14% of the US adult population in any given year. In this article, we’ll tackle the background of alcohol abuse and alcoholism, as well as symptoms, diagnosis and treatment options for the disorder.

The Centers for Disease Control estimates that 88,000 deaths occur in the United States each year due to alcohol. Alcoholism is the third leading cause of preventable death — after tobacco and obesity. Moreover, even though alcohol addiction is a serious problem, only about 8% of affected individuals receive treatment for their substance abuse.

So when does alcohol consumption turn into an addiction? Alcohol addiction is a chronic disease, characterized by the physical dependence and psychological need for the substance. It brings along serious consequences, including social, legal, job, family, and money problems. The occurrence of other addictive behaviors, alongside alcohol use disorder, is common. These other addictions include drug abuse, gambling, and sex addiction.

Alcohol addiction affects teens, as well as adults. In response, many high schools, colleges, and universities have taken steps to prevent alcohol abuse in children and young adults by referring the affected students for treatment. Binge drinking among college students, however, remains a serious problem.

Causes of Alcohol Use Disorder

Studies suggest that both physical and mental characteristics contribute to alcohol addiction.

Physically, alcohol strongly reacts with nerve cells and neurochemicals, in turn causing changes in your brain circuits. These changes lead to a desire for more and more alcohol, creating a kind of feedback loop. You will probably feel a constant craving for the substance. Over time, your body becomes used to the effects of alcohol, and more and more is needed to produce the pleasurable effects you felt at first. According to some studies, certain people have also inherited a genetic tendency towards alcoholism.

Environmental factors and mental health can also contribute to an alcohol use disorder. Bad childhood experiences are strong factors in adult binge drinking. Social influences, such as cannabis use, and stressors, such as community violence, are also strong predictors of AUD in young people.

Warning Signs and Symptoms of AUD 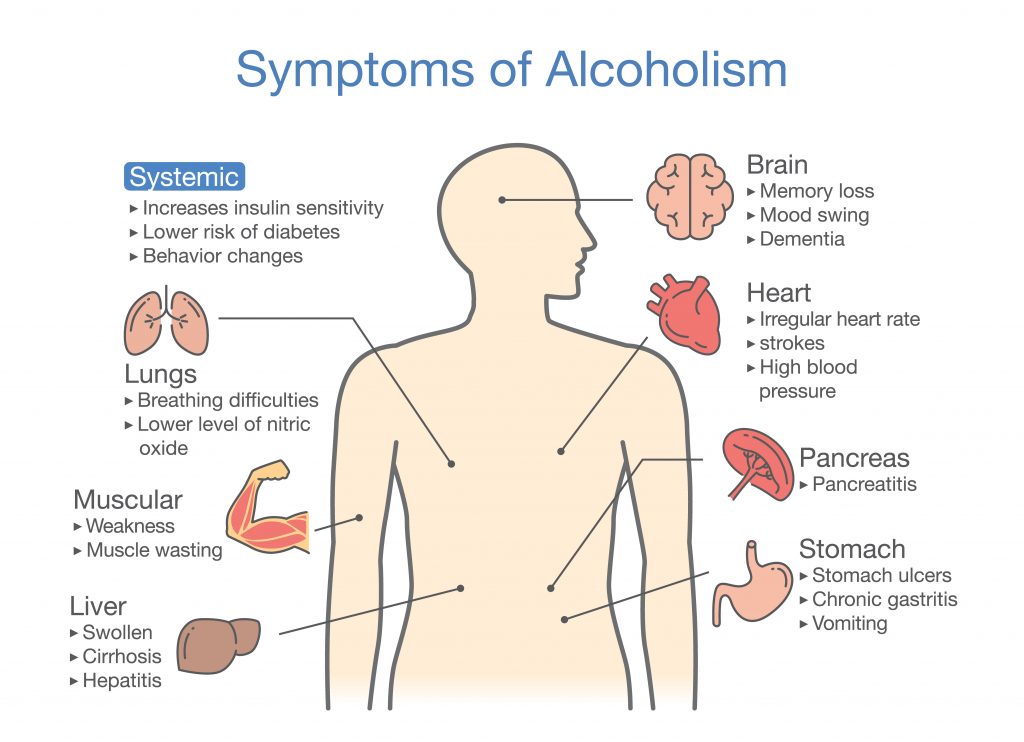 Alcohol affects your mental and physical functions. These include your:

Other signs may include forgetting what happened during a drinking bout and feelings of guilt or shame after drinking. Accidental injury to self or others can occur, as well as the loss of control over behavior. Additionally, if your friend or relative is concerned about your drinking, you may have a problem with alcohol.

Oftentimes, people who struggle with alcohol also have a co-occurring mental health disorder. Recent studies suggest that these two problems have similar causes in the brain, rather than being two separate conditions.

The most common ones include:

One of the most serious effects of alcohol addiction is the withdrawal symptoms that can materialize when someone attempts to go “cold turkey” or when they can’t get more alcohol. Withdrawal symptoms can include:

Getting an AUD diagnosis

The World Health Organization (WHO) has developed a tool, called the Alcohol Use Disorders Identification Test (AUDIT), to help in the diagnosis of alcohol addiction. This 10-question quiz has a self-report option, but a mental health professional may also direct the test. The questions mainly focus on the amount of alcohol consumed, drinking behaviors, and possible problems related to alcohol abuse.

Be aware that the last few symptoms can lead to death in severe cases of alcohol addiction. At very high blood alcohol concentration (BAC) levels, individuals can lose consciousness, stop breathing, and die. Long-term use can especially cause damage to the brain and liver. Women who use alcohol during pregnancy can also have babies with birth defects.

Psychological factors can also play a part in getting your diagnosis. For example, anxiety and depression can trigger your need for more alcohol. Your doctor may also ask about your social life; if you have problems with social interactions, this may confirm your diagnosis. 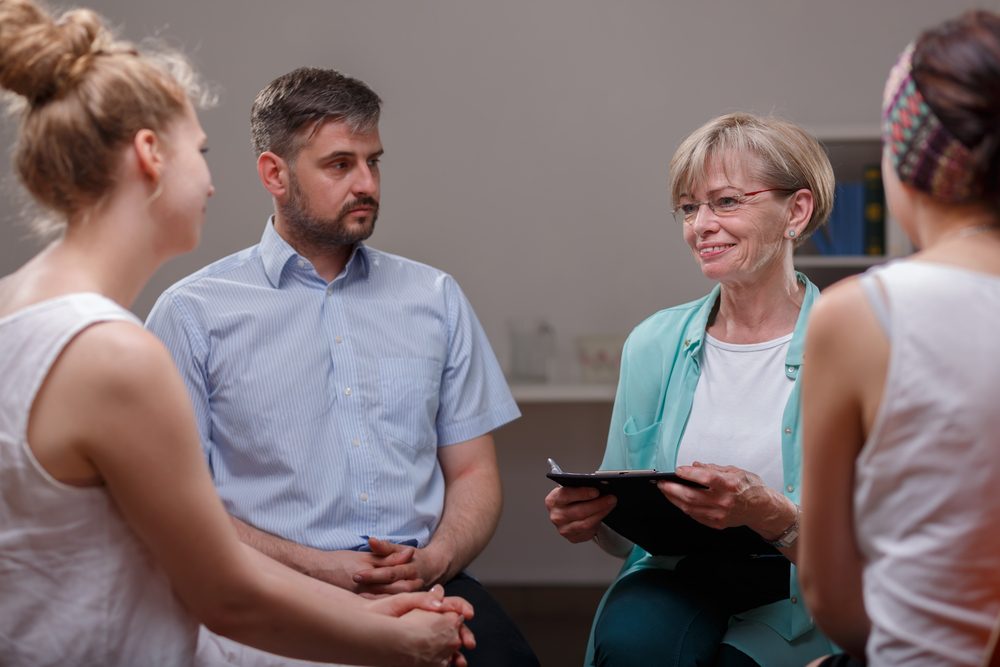 Alcohol addiction, while common, often goes untreated. Many people believe that there is no effective treatment for alcoholism, but that is completely untrue. There are several effective steps for treating alcohol abuse. The rehabilitation process consists of four steps:

It is important to understand that there is no “one-size-fits-all” treatment for alcohol addiction. Instead, one person may require medications during the recovery process, while another may benefit more from outpatient or inpatient psychological treatments.

Medications are considered first-line treatment for moderate to severe AUD. A medical doctor, usually a psychiatrist, can prescribe medications to help you during treatment. They may be used alone, or alongside other psychological treatments.

The three most common medications used to treat AUD include:

Disulfiram blocks the metabolism of alcohol by the body and helps cause unpleasant side effects, such as flushing of the skin and nausea, when you drink. Naltrexone can prevent relapse and help reduce heavy drinking, while Acamprosate can help addicts maintain abstinence. A variety of other so-called “anti-craving” medications are also available to treat AUD.

Many patients diagnosed with AUD are treated with counseling rather than with medications. However, counseling can also be used alongside medications. These interventions can vary in intensity, and include both outpatient and inpatient treatment centers.

Psychological treatments, such as cognitive behavioral therapy (CBT), can reduce the need for more alcohol. They can also help reduce the negative feelings that come from drinking too much alcohol. Counseling can also provide a strong social support system and help patients to develop the skills necessary to stop or reduce drinking. Other benefits include setting reasonable goals, and teaching patients how to cope with or avoid triggers that could cause a relapse.

Inpatient programs offer controlled settings where the removal from alcohol can occur under medical supervision. They also offer situations where patients can be protected from the temptations to drink. Individualized treatment programs are also usually offered. When you enter an inpatient center, you also benefit from the various support groups and therapies offered on-site.

When looking for an inpatient treatment facility, you should consider the following:

Many treatment centers have Alcoholics Anonymous (AA) programs alongside their other therapies. Although AA has sometimes been criticized as being too “patriarchal”, it is still credited by many with guiding them to a path of sobriety.

Helping addicts return to a normal situation outside treatment can help prevent relapse. This requires a plan to be in place as soon as possible, and many treatment centers start the process of aftercare at the time of admission. For some, it may help to go back home. Other people, however, may find that living in a structured community after discharge can help them maintain sobriety.

Social connections are also important factors in helping to prevent lapses in sobriety. That’s why it’s best to include family and friends into the recovery process. Relationship terminations often lead to relapse, so maintaining strong connections can help with the success of rehab programs.

Alcohol addiction is a complex issue, and your inpatient treatment needs to be comprehensive to help you succeed. At The Woods at Parkside, we’ll help you prepare for long-term recovery. If you have any questions about our life skill groups, you can fill out this contact form or call our admissions specialists at 419-452-4818. Whenever you are ready to seek help, we’ll be there for you.